What is Delayed Flight Compensation?

Flight delay compensation, created through EC 261/2004 initially only allowed for compensation to be awarded for individuals who are denied boarding or their flight has been cancelled. Through case law, this extended the regulation to include delayed flight compensation. On this page, we will explain how to make a claim. We will also discuss the different elements of a delayed flight claim.

What is flight delay compensation?

How much can you claim?

When can you claim compensation for a delayed flight under EC 261/2004?

If your journey has been disrupted you can make a ompensation claim when:
Your flight has been…

If your flight suffers a delay and you arrive at your final destination more than three hours later than scheduled.

You are not entitled to compensation if your flight suffered a delay due to extraordinary circumstances.

“Denied boarding” is when an airline refuses to carry passengers on a flight, although they have presented themselves for boarding.

You are entitled to compensation except where there are reasonable grounds to deny boarding passengers, such as reasons of health, safety or security, or inadequate travel documentation. 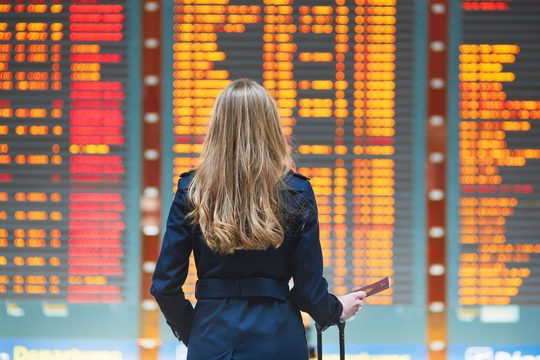 If your flight suffers a cancellation, you are entitled to flight delay compensation under EC 261/2004 unless;

– you have been informed of the cancellation at least two weeks before the scheduled time of departure; or

You are not entitled to flight delay compensation if your flight was cancelled due to extraordinary circumstances.

Flight delay compensation – How we have helped so far!

How much flight delay compensation can you claim?

for flights of 1500 kilometres or less (short haul)

For intra-Community flights of more than 1500 kilometres.
For all other flights between 1500 and 3500 kilometres; (medium haul)

For non intra-Community flights over 3500 km where the disruption  to the flight is more than 3 hours but less than 4, upon the arrival at the destination

For non intra-Community flights over 3500 km where the disruption to the flight is more than 4 hours.

To see the claim form please click the button below

Want to read our full guide on Flight delay compensation?

If you would like more information about what to do if your flight is delayed, cancelled or you are denied boarding. Please click the button below

Can anyone make a flight delay compensation claim?

The short answer is no, Under the Regulation EC 261/2004, to be applicable for the compensation you must fit into the scope of the regulation.

The scope says that you must fit into the following criteria to be covered by the regulation.

1. The passenger must be departing from a from an airport located within the territory of a member state covered by the regulation. Or;

2. The passenger must be departing from an airport outside of the territory and flying with a community carrier.

3. The passenger must have a confirmed reservation on the flight.

6. If the passenger has travelled at a reduced price that is not available directly or indirectly to the public, such as airline staff discounts, the regulation for delayed flight compensation will not apply.

7. The passenger must by travelling by motorised fixed-wing aircraft.

As long as you fit these categories, you will be covered by the regulation. However, this does not mean that you will be entitled to delayed flight compensation.

For examples of when may or may not be covered by the regulation, please see the examples below.

How do we process your Flight Delay Compensation Claim?

The first step is to notify the Airline that you want to claim compensation for your disrupted journey.

We will also be informing the airline that you have instructed us to do this on your behalf.

Within this letter, we will want to put as much information as possible. Therefore if you have any expenses that you have proof of, or anything else you would like us to raise with the airline, please make sure we have this information so we can include this within this initial letter. We will then give the airline 28 days to respond.

The airline will do one of three things at this point;
– Deny the  claim, (Your claim can be denied for a number of reasons for more information on denials please see below)
– Make an offer; or
– Not respond. As states in step 1 From the date, we send the initial letter we ask the airline to respond within four weeks however at peak times such as Easter and Summer it can take airlines up eight weeks to respond to each letter.

What happens if the airline denies your claim?

If the airline denies the claim, they will either supply evidence or not. Either way, we will review your file to see if the denial has any credibility. We will then decide on whether your case has reasonable prospects to continue, or whether your case has no chances of success. If we believe your claim is likely to succeed, we will request that the airline must send sufficient evidence to support their denial or raise payment.

What happens if the airline offers to pay your claim?

If the airline makes, an offer, we will review the offer to ensure that the airline is willing to pay the correct amount of compensation that you are due. If the offer is accepted, it usually takes approximately four weeks for us to receive the payment from the airline.

What happens if the airline doesn’t respond to your flight delay compensation claim?

If the airline fails to respond to our initial letter, they will then review your claim for the prospects of success. We will then look to commence court proceedings if your case is applicable.

If the airline has not responded to our initial letter for flight delay compensation or a follow-up letter, or if they have made an offer but failed to make payment. We will commence court proceedings on your behalf.

No, this will not affect the amount of fees you have to pay. This is all covered within our ‘No win, no fee’ Agreement.

How do you make a compensation claim directly against the airline?

Some airlines have edited their General Terms and Conditions. Within these Conditions it will state that you must submit the initial request for compensation to them directly. However, they have likely forgotten to tell you this when the disruption to your travel occurred.

Please click the Name of your airline below and we will take you through the process of how to submit a claim to them directly. This should be relatively straightforward and should only take two to five minutes.

How to make a flight delay compensation claim against Ryanair?

How to make a flight delay compensation claim against Easyjet?

How to make a flight delay compensation claim against Virgin?

How to make a flight delay compensation claim against British Airways?

How to make a flight delay compensation claim against Emirates?

When a couple separate a Child Arrangement Order may be required to determine where the children will live following a dispute. Read more.

The Motor Insurers’ Bureau is often able to compensate you in hit and run accidents or in accidents involving uninsured drivers.

Separating from your partner and how to get divorced

Find out more about separating from your partner and your divorce. We offer free initial consultations and provide advice tailored to your circumstances.

Speak to our solicitors if you have been injured by a defective product. We can often handle a prospective claim on a no win no fee basis. Find out more.

What is Medical Negligence?

Medical negligence occurs when a medical professional provides substandard care to a patient which causes direct harm or makes a pre-existing condition worse. There are a number of different ways this can occur whether that is through misdiagnosis, incorrect treatment or surgical mistakes.

Breach of Contract – What Is It? And How to Enforce

Details of the case Mr John Bennion and his wife instructed us to recover compensation from the airline TUI. The amount of compensation claimed was to the sum of €250[…]

Find out more about reporting your accident at work and the time limits for bringing a claim by reading our free guide. For more information about bringing a claim, speak to our experts today.

When have you been Mis-sold Solar panels? With the boom in the push for green alternatives for energy over the past ten years. Solar Energy has been at the forefront[…]

Workers in Britain do not receive holiday pay they are entitled to by law. This is according to analysis from the Resolution Foundation. Find out more.